Chennai-based visual artist Parvathi Nayar plays an active role and is deeply committed to supporting the emerging renaissance of the contemporary art in Chennai. She left Madras to obtain her master's degree at the Saint Martins, in London, then came back to live and work in the subcontinent.

Parvathi is best known for her videos and her complex drawing practices; she also engages with sculpture, painting and photography. Her black-and-white graphite drawings are multifaceted works that look at the internal/intimate spaces within our bodies, and the external/public spaces in which we live, often through the prism of science and technology.

She is a pioneere in the form of “drawn sculpture” i.e. three-dimensional sculptural forms that are covered with drawings as in the seminal 20-foot high drawing “A Story of Flight”, that is part of the now world-famous Jai He art programme at the new T2 Terminal, Mumbai international airport. She was a part of the Indian artists, invited to exhibit their works at the Kochi-Muziris Biennale 2014/15. Her work was presented in Singapore and is presented in numorous institutions such as the Singapore Art Museum, BMW, HCL, The Sotheby's Art Institute.

Exhibited in the Salle des lavabos of the Ecole des filles, her drawings, as complex as fluid, develop on a surprising three-dimensionality. Pioneer in what she calls the “drawing sculpture”, she questions the scien- tific and technological link to the world in a great movement of grey and white. 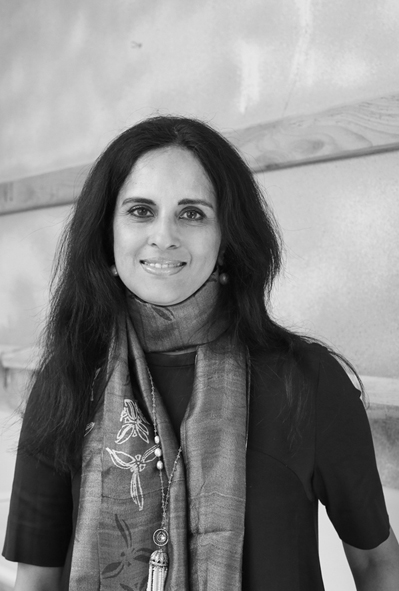