Daniela Schlagenhauf
(born in 1975 in Niederlenz, Switzerland, lives and works in Sainte-Eulalie)

In 1977, Daniela Schlagenhauf left Switzerland after her baccalaureate and went to France for a short period to take pottery classes. However, she stayed for 2 years in France, working in the workshops of Jean Linard, Claire Berger and Claude Champy; this led to two major decisions: to stay in France and to continue working with clay.

From 2009, a new body of work focused on the interaction of ceramics and the sign. The Works are no longer signs of support but signs/signifiers themselves; large abstract sculptures created in porcelain that defy the material, and draw the void came into being.

It was also a period of questioning :

In 2010, she began a cycle of installations under the theme "resonances" that has led to 8 installations up to now. Each new installation was created from a personal experience that is governed by a protocol of action similar to the constraints imposed on the authors of the OULIPO.

These achievements have allowed her, since 2011, to be selected for exhibitions, colloquia and residencies around the world. 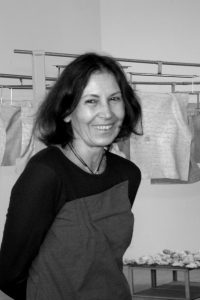